Temporarily breaking out of the 90s pirate radio time capsule, and ahead of the Rupture x 25 years of Bassbin event at FOLD on April 9th, I decided to dig into my archives and post the radio debut of Breakage‘s seminal This Too Shall Pass album, presented by DJ Flight on her BBC 1xtra Next Chapter show in May 2006. The album was released on Bassbin later that year.

Listen to DJ Flight Presents Breakage’s Debut Album: This Too Shall Pass on BBC 1xtra (10/05/06) byurbanocturnal on hearthis.at

Both Breakage and DJ Flight were instrumental in the resurgence of jungle music in the early 2000s, and 2006 saw the first Rupture event at Dingwalls in Camden. Flight’s interview with Breakage and the album debut start 27 minutes into the recording. 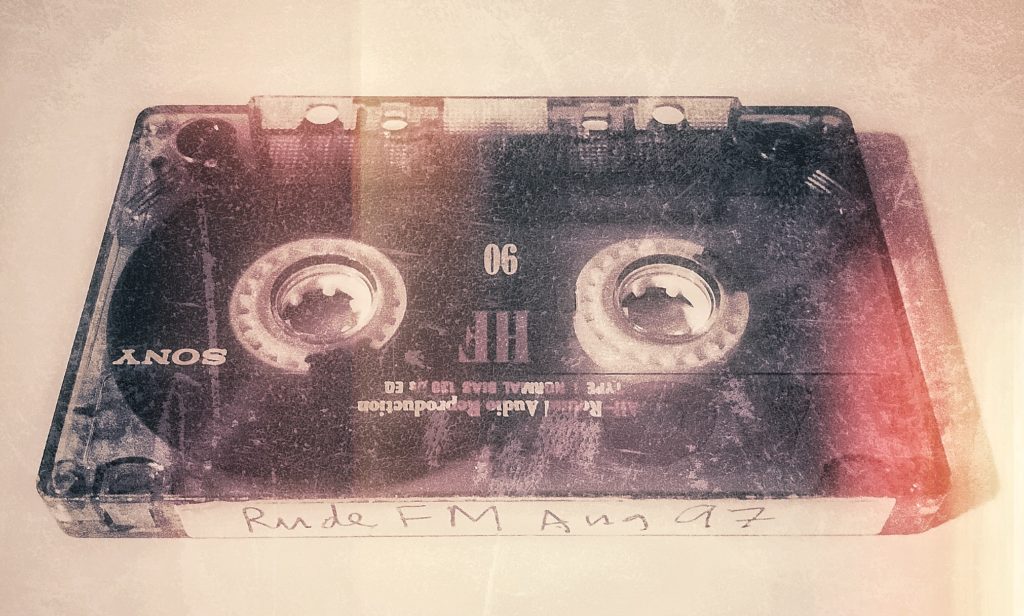 Following on from my previous post, below are three more Rude FM tapes I recorded in the summer of 1997. First up is a heavy jump up selection by DJ Skills, who had a regular Sunday slot on the station. I have one other recording of his show from 1997 but so far I have not been able to find any information about him online, apart from a single mention in this Facebook post. One of my favourite tunes from this set is the amen tear-out Last Gasp by T.I.C., which still feels futuristic and wouldn’t sound out of place at Rupture today.

Next up is yet another jump-up set by Chopper D and MC Evil B (a.k.a. B Live), recorded in early August. The video below is one of my favourite moments on the tape where Evil B shows off his MCing skills.

When I tweeted the short clip above I got a reply from DJ Kryptonn, who used to buy vinyl from Chopper D at Bluebird Records in 1996:

I've still got a Bluebird Records carrier bag with Chopper D's Rude FM show advertised on it. He wrote it on the bag as he handed me some fresh drum & bass vinyl. pic.twitter.com/vHm5Ukb5K9

The final tape is one of my favourite old school jungle sets that I managed to record off the radio. It was mixed by DJ Chillum, who was one of the key partners at the station and who sadly passed away at the end of last year. The selection dates back to 1993, and somehow it feels crazy that I was making these recordings only four years later and yet the music had already evolved so much during that period. I had to spend quite a bit of time on digitally restoring this tape, as it was thoroughly worn out from doing multiple rounds in my Sony Walkman.

Thanks for tuning in, and look out for more of my pirate tape uploads in the near future.

Many thanks to JJ for the track listing of the set by DJ Chillum.

This post was delayed due to my tape player developing a major technical fault, which took quite some time to resolve. Now that I’m back in action, I decided that I should upload two Rude FM tapes I made in July 1997. 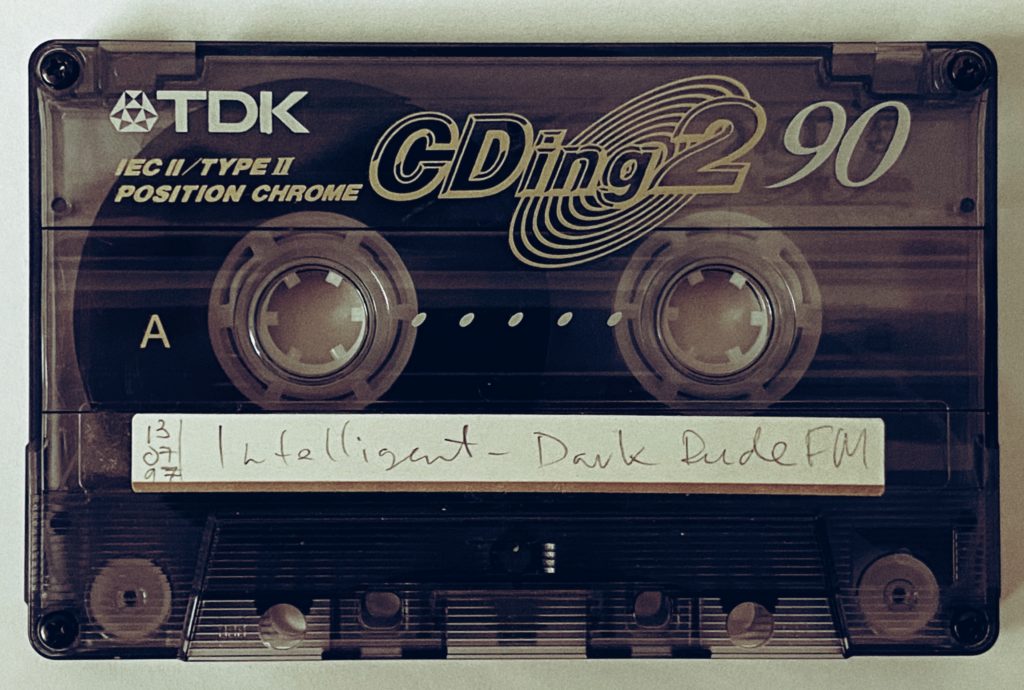 First, a few words about the recording location. I made these tapes while living near one of the most elevated spots in South-East London, which provided for fantastic pirate radio reception, and by walking several hundred metres I was able to get stunning views of the London skyline (see the images above and below). Coincidentally, Reprezent 107.3 – one of London’s most popular community-licensed stations – currently have their FM transmitter just a few streets away.

Rude FM is a legendary pirate that belongs in the same hall of fame as Kool FM and the Weekend Rush. Founded in 1992, the station was a constant presence on the FM dial, playing hardcore, jungle and drum & bass, and in fact has only recently left the airwaves. Brian Belle-Fortune’s excellent book on the history of jungle, All Crews, has an entire chapter dedicated to the station and its origins. Amongst the key characters affiliated with Rude FM the author mentions DJ Psychic, who held down a regular Sunday slot between 2 and 4pm, playing mellow drum & bass (which was also dubbed “intelligent” at the time). Surprisingly, very few recordings of his shows are available online, so this first upload is an exclusive!

Amongst the interesting things mentioned by Psychic during the show are that he was interviewed on a Channel 5 programme featuring Rude FM (I have searched for it but so far can’t find any traces online), and that sending shouts to mobile phones via text messages was a novelty in 1997. The adverts feature Rhythm Section, the record shop that was affiliated with the station, and the Youth Awareness Programme, which provided verified information about drugs confidentially over the phone.

The next tape is on the darker side of drum & bass. The selection is emblematic of the corresponding period in 1997: still maintaining a healthy balance between tech-stepping beats and amen breaks. Side A features a set by Dylan while Side B has an excellent mix by a DJ whose voice is very familiar to me but whose handle I have unfortunately forgotten! There are a few lesser-known tunes on this side, such as Reminiscence by Mace, as well as one of my personal favourites, Warriors, at the very start.

Thanks for tuning in, and look out for more of my Rude FM uploads in the near future.

Many thanks to DJextreme for the track listing of Dylan’s set. 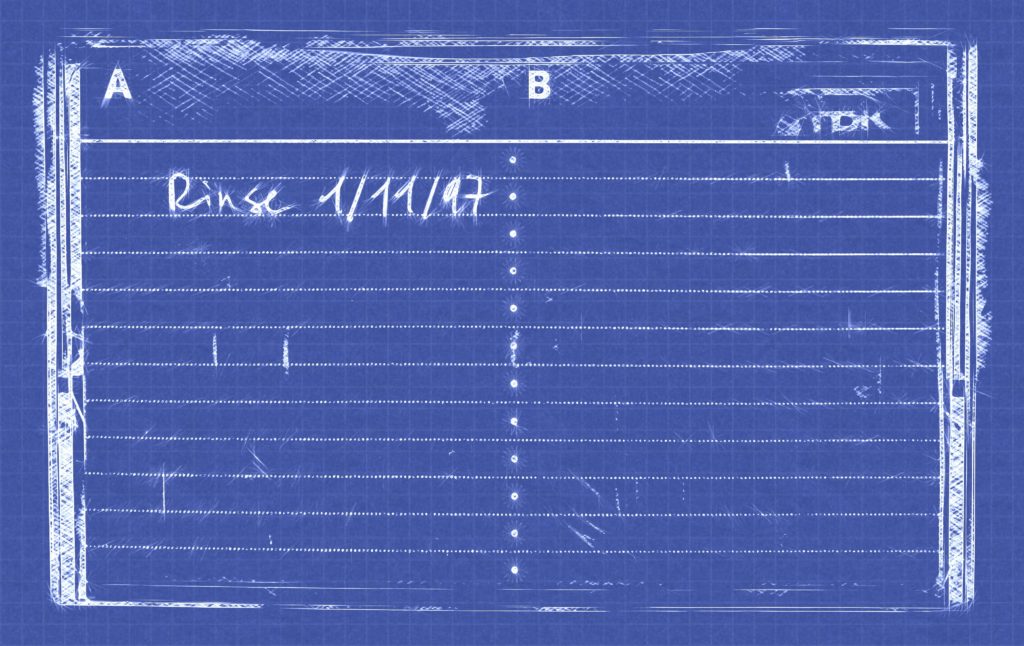 This is the second tape I’m posting from my recovered archives. Nowadays, anyone who follows urban dance music will have heard of Rinse FM. However, newer listeners may not be aware of the station’s pirate origins prior to obtaining Ofcom’s community radio license in 2011:

Rinse FM is universally recognised as having played a key role in the emergence of grime and dubstep in the early 2000s and there are many recordings from this period of the station’s history available online. Although Rinse started out as a jungle and drum & bass station in back in 1994, there are relatively few recordings around from their pre-grime/garage days. I happened to tune in to one of their shows on one rainy Saturday afternoon in November 1997 and hit the record button. Note the regular shouts-outs going out to Wiley. 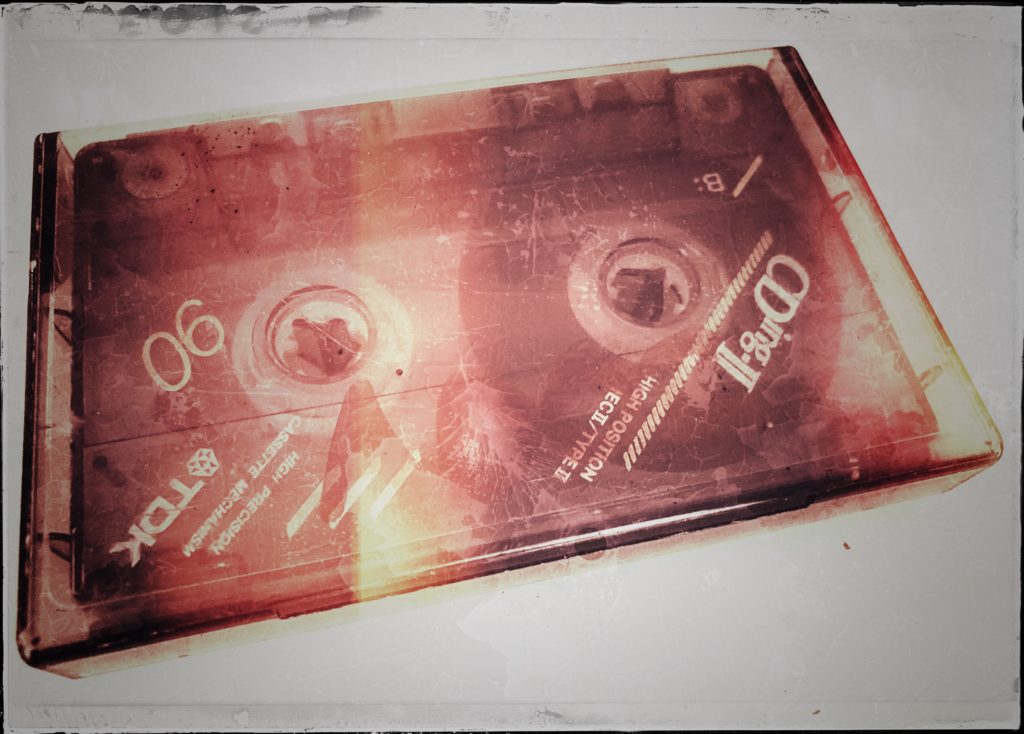 In the years between 1995 and 1999 I recorded a number of tapes of London’s pirate radio stations. Pirate radio was my gateway into the world of jungle music, as I was just shy of the minimum age limit to be (legally) admitted into raves. I remember countless nights when I would be sitting by my table-top FM radio and listening to the likes of Kool FM, Eruption, Rude FM and Don FM. Whenever I would hear something that I would really like, I’d throw in a blank audio cassette and start recording, although I had to make a careful decision each time as good quality tapes were not cheap! 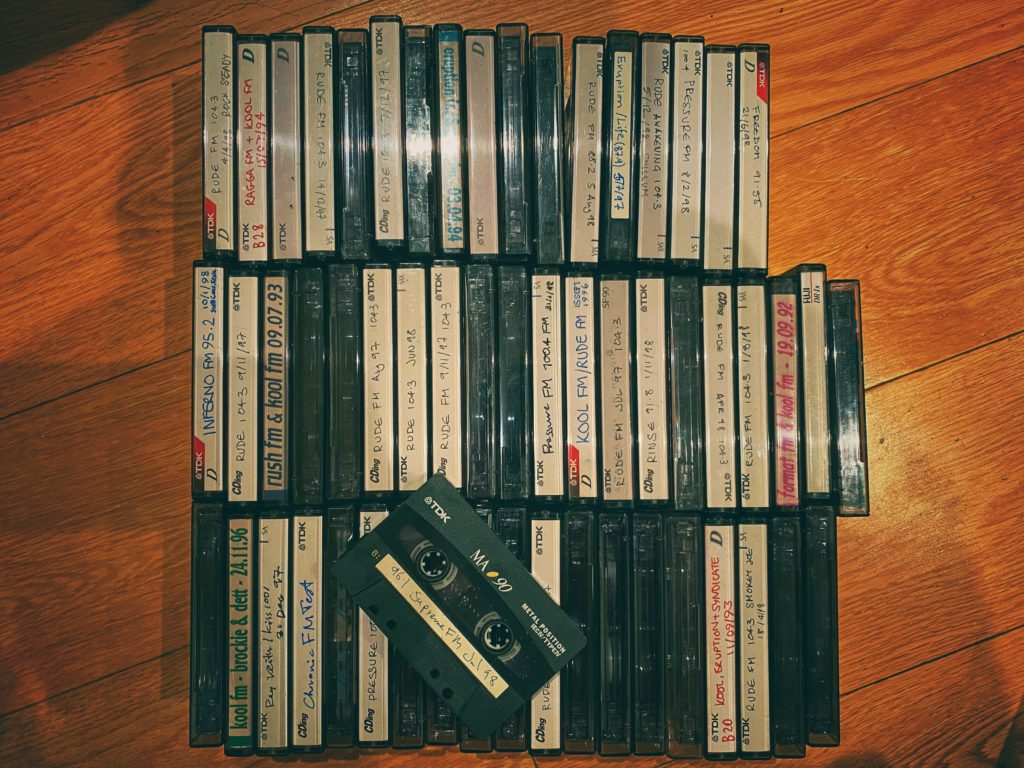 Those years marked the evolution of jungle into drum & bass, and every few months a slightly different yet distinct sub-genere would emerge that is still possible to date with accuracy today. It was an exciting time to be listening to the pirates, as well as to legal stations like Kiss FM and the iconic One In The Jungle show on BBC Radio One. I was pleased with my growing tape collection and felt like I was documenting an important part of the UK’s music history. I also had quite a few pre-1995 tapes, which were copied for me by a friend to help me catch up on what I had missed out on in the early jungle days.

What happened next was heartbreaking: while I was away from home, a flooding accident damaged a lot of our possessions, and it appeared that all of my tapes had perished alongside. That’s what I carried on thinking for about 20 years and until last week, when we discovered that many of these tapes were in fact preserved and had been quietly sitting in a cardboard box in my brother’s garage ever since!

The tapes seem to have survived huge temperature and humidity variations, which simply amazes me. I’ll be gradually digitising and uploading them in the next few months. Rediscovering these tapes feels like entering a time capsule and brings up a mixture of emotions ranging from wistful nostalgia to happiness and gratitude. Below is a July 1997 recording of Life FM, a somewhat short-lived pirate station of which I couldn’t find any other recordings online.

Back at the start of the first lockdown in 2020 I decided to revive an old passion of mine — listening to London’s pirate radio. Below is my original Instagram post describing what I was hoping to achieve at the time:

10 months later, I am happy to report that I have uploaded over 30 pirate radio recordings — all made in 2020/21 — and many more uploads are on the way. Whenever I managed to record something really good from community-licensed stations, many of which are former pirates themselves, I uploaded that too. This project now has its own website and a small but growing following. There are no restrictions in terms of musical styles. The idea is to showcase the diversity of London’s local FM radio landscape and to pay homage to a medium that was instrumental in the formation of multiple musical genres but is now endangered by the proliferation of digital streaming. I hope you take the time to check it out! Below is one of my favourite recordings so far: 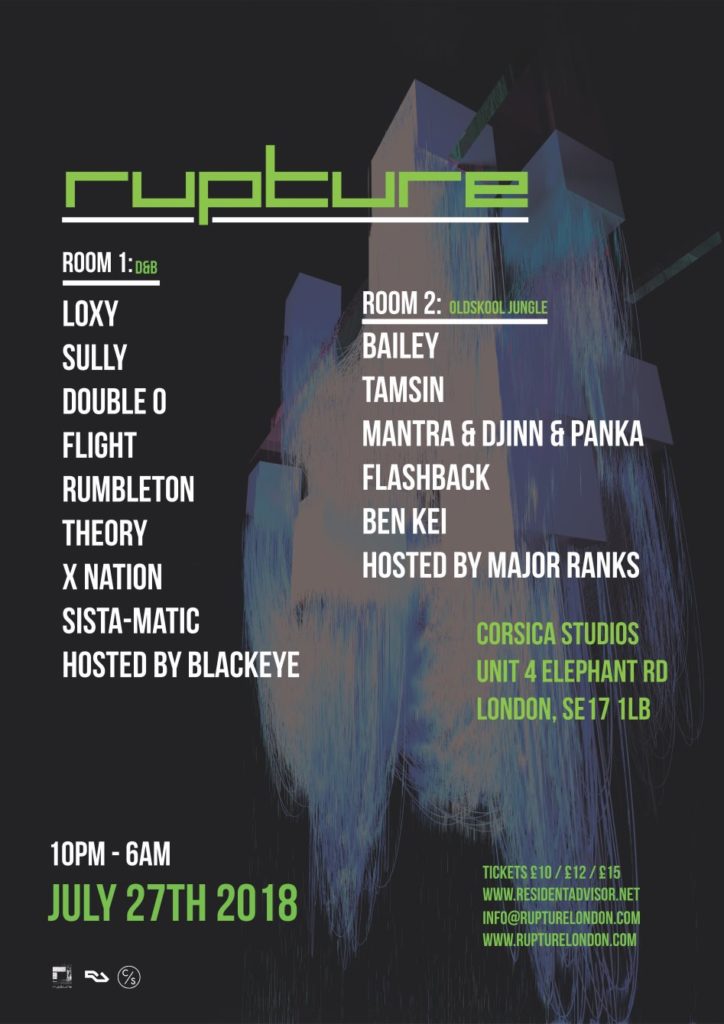 This time, my favourite sets were by Sully and Rumbleton:

A quick post on the latest Rupture night. The event took place on Bank Holiday Sunday and boasted the following line-up: 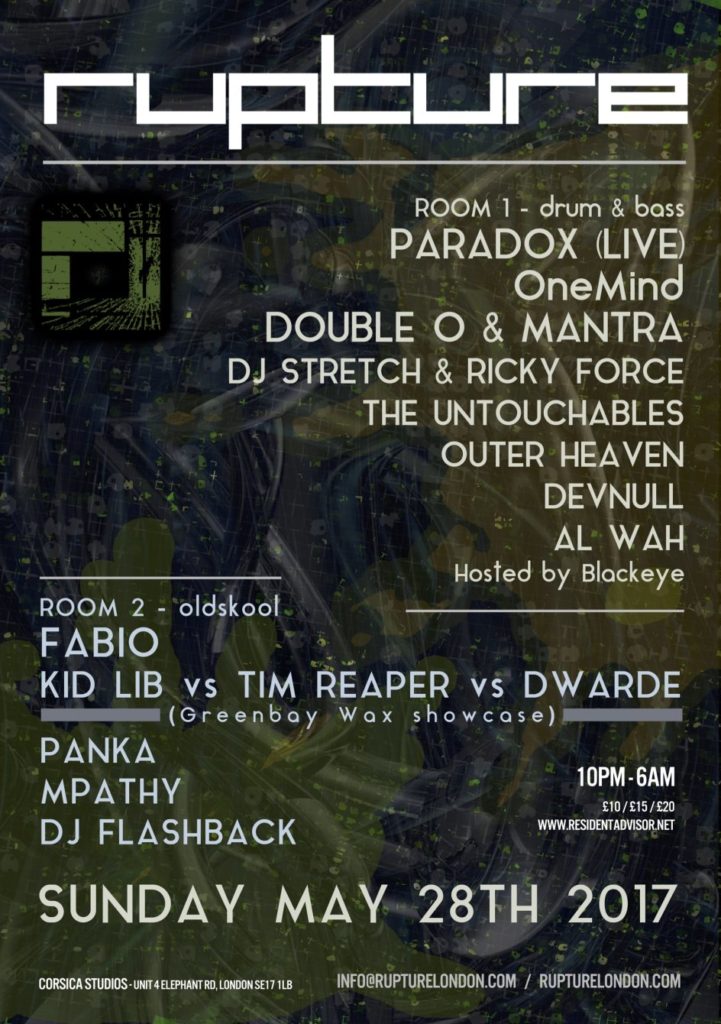 The highlights of the night for me were the sets by Double O & Mantra and Fabio:

This mix was supposed to be the sequel to Junglist Credentials Part 1, but when I finished it I realised that it has a very different sound so I decided to give it a new name instead of simply calling it “Part 2”.

The idea behind it is the same, however: to recreate the atmosphere I experienced while listening to London’s pirate radio as a teenager in the mid-90s. The track listing dates back to circa 1994 and once again there are a few lesser known tunes thrown into it for good measure.